LOCKDOWN UPDATE
At first those of our members who wished to, shared pints over Zoom meetings, so we visited the Lockdown Inn, the Zoom Inn and others. We had beer themed quizzes and we diverted with a Cider meeting. When we were able some of us we met in Ealing parks in groups of up to 6, even simultaneous meetings in different parks. Now a fair number of us are back meeting in pub gardens. Groups sizes dependent on Covid regulations. In May we went to The Foresters, Northfields, whilst in June, we visited the Red Lion, St Mary’s Road. The plan for July is one of our favourites, The Express Tavern, Kew Bridge.

We welcome enquiries from new members.

Beer Investigation
This is a group for those who are interested in Real Ale and the modern variants. The group was started by the late Stan Owen a few years ago.
Currently the group has around 30 members, and is not seeking more participants as it is about the right size for the the pubs we visit. However, if you would like to join a similar group, please contact the convenors (Patricia and Sue, details below) who will help you set up another group.

We meet at least once a month usually on a Thursday lunchtime for lunch and to sample ales. This is not a regular Thursday but depends on beer events. We travel to the venue after the U3A weekly talk, or meet at the venue for those not going to the talk.

Duration - leisurely lunchtime 1-2 hours - join at your leisure, leave early if you wish.

Venues – pubs with an interesting offering of ales, often free houses or microbreweries, mostly in Ealing/Hounslow boroughs, occasionally further afield. We include local beer festivals. The plans for the next few months are shown below.

Format - casual chat with like-minded men and women from U3A.

Next Outings
=========
The next outings will be announced once we are able to visit pubs again as a group.
Patricia and Sue will advise details on any future outings in due course.

Any other suggestions for future venues welcomed - please email Patricia if you have any ideas.

Conveners: Sue Sotheran and Patricia Donnithorne. Sue is the main phone contact (020 8998 6281) and Patricia the main email contact. Email through the blue bird contact on this page.

1 THE CITTE OF YORKE - A characterful Sam Smiths pub, Victorian medieval style.
2 THE VIADUCT TAVERN - a lovely old Gin Palace, decoration well-preserved.
3 THE BISHOPS FINGER, WEST SMITHFIELD. Once the only London home of Kent's Shepherd Neame. The name refers to the Canterbury pilgrims' signposts.
4 THE HAND AND SHEARS, welcoming little multi-roomed gem. Timothy Taylor, a Stroud bitter and others on recent visits.

The October outing saw us visit The Tabard in Turnham Green and the Packhorse and Talbot on Chiswick High Road.

The November outing was to pubs in Hammersmith, starting at The Draft House - a modern craft beer offering, modern style pub where there was a chance of hearing each other talk!
Afterwards to The Swan, King Street - traditional, more history and good ale offering, but very noisy; music and traffic.

The December outing was to The Wheatsheaf, in Haven Lane, Ealing; a nice cosy pub with a varied menu and Fullers beers. 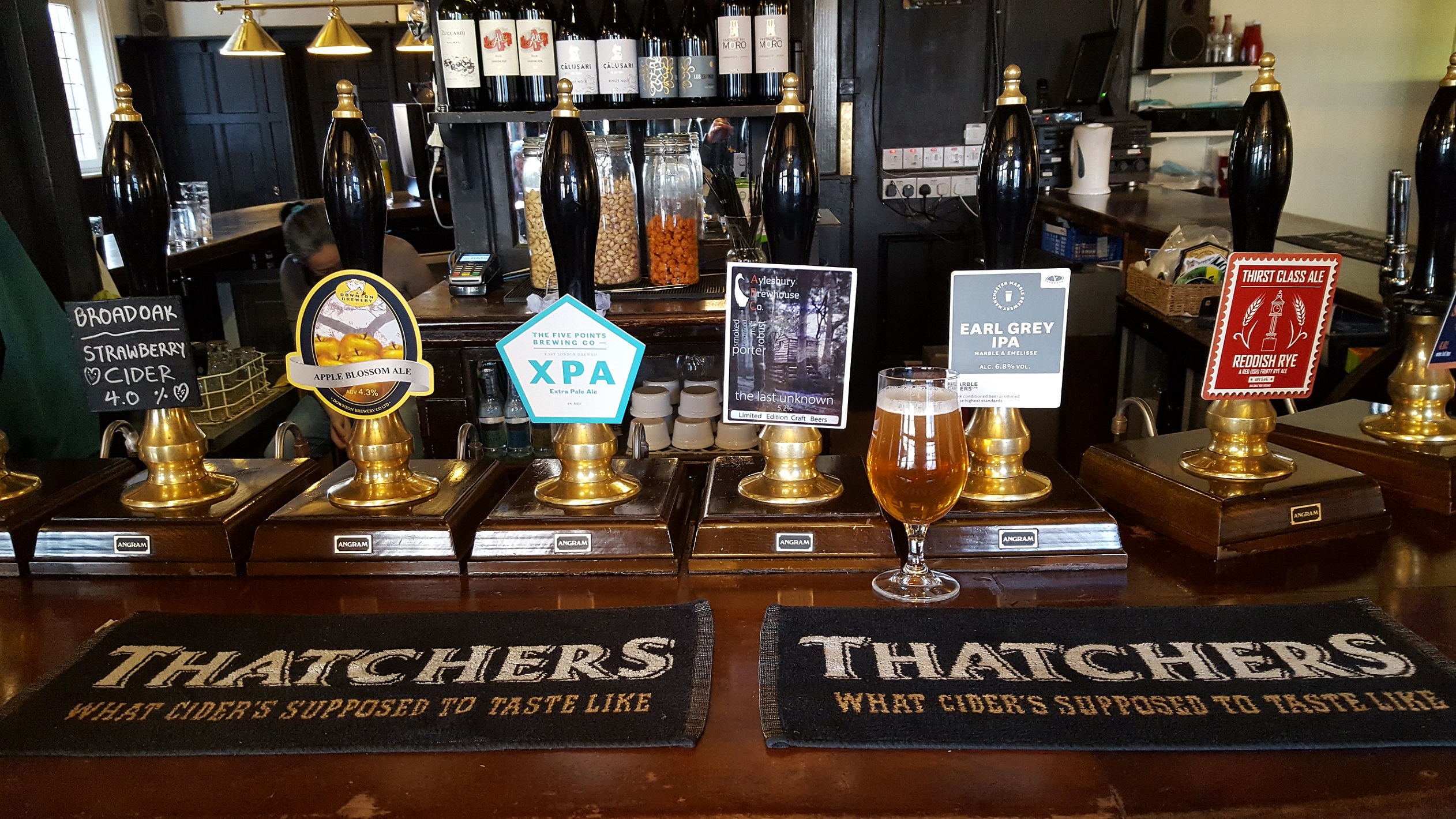 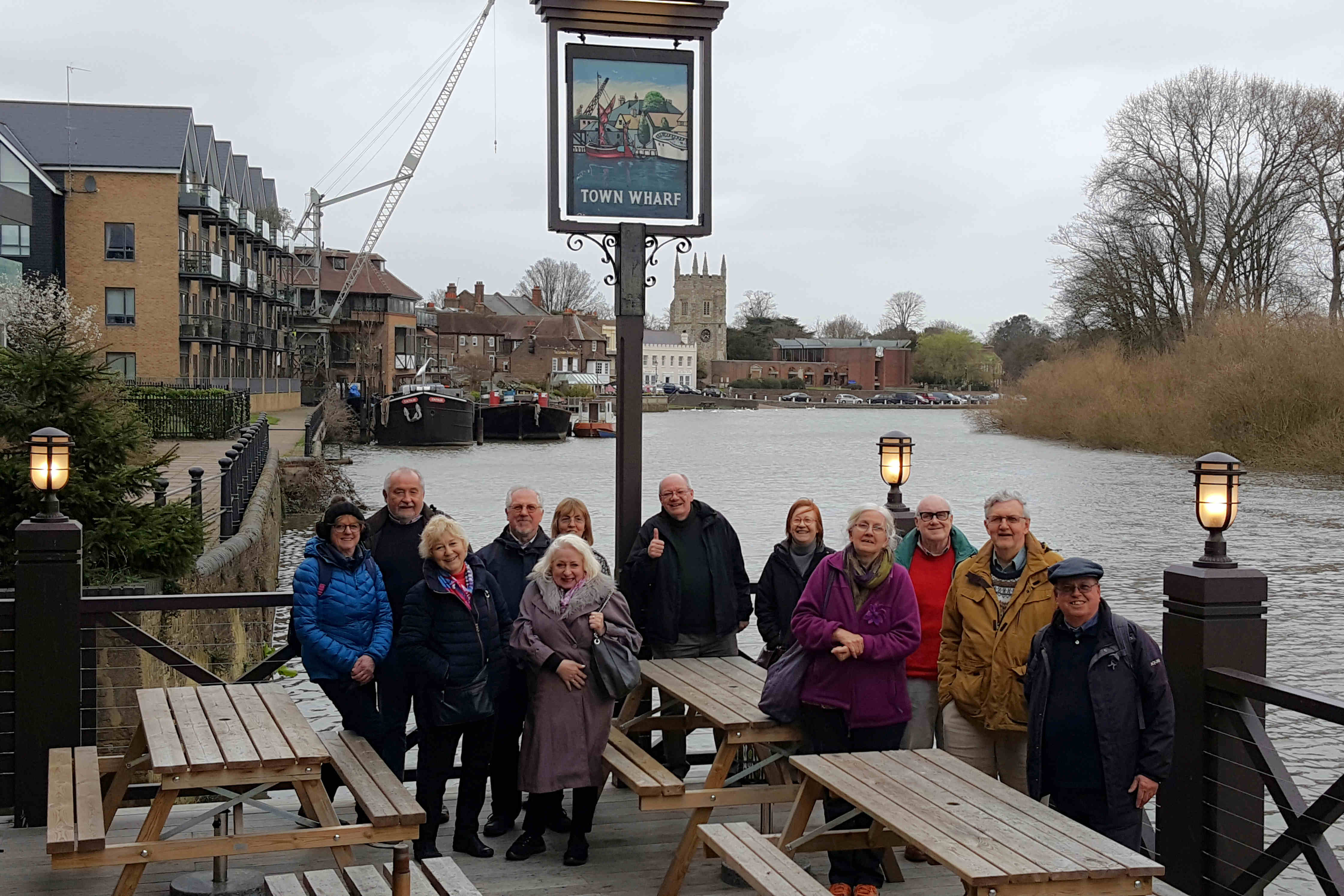