The Petersfield U3A Cycling Group was formed in 2000.

The unlikely concept of a group of “third agers” regularly getting on their bikes to enjoy exercise, the countryside and company has been an outstanding success.

The group has around 40 names “on the books” and rides regularly attract 10 -12 riders. The record is 21. We are social cyclists. We have no pretensions of athleticism. We don’t wear multi coloured lycra. We don’t charge along the roads “head down, bum up”. We potter along at average speeds below 10 mph on rides varying between 15 and 30 miles - stopping for coffee (often) and lunch (always). If the hills are too tough we walk and we always wait for those at the end. Our bikes vary from quality road bikes (and one classy tandem) to “shoppers” (complete with baskets) to pretty well everything in between – including an increasing number electric assist bicycles.

Most years a dozen or more of us have got together for a 3 or 4 days cycling holiday. These have covered places such as the New Forest, the Suffolk/Essex borders, North Kent coastal trails, Isle of Wight, Norfolk and Jersey. That these breaks happen annually is proof of their popularity. We hope we can demonstrate that third age cycling isn’t a pain, it’s FUN.

To help riders we try to give our rides a general broad rating as to distance and difficulty. The ratings are :-

2 = Moderate (short/medium, up to 20 miles and or some undulation)

3 = More challenging (longer, up to 25 miles and/or a number of smaller hills)

4 = Strenuous (long ride over 25 miles, possibly up to 35 miles and/or several serious hills)

Spring 2019 Holiday - The Malverns
20 May
The first day saw the group gathered in the village of Welland for an afternoon ride against the backdrop of the Malvern hills, through traffic free lanes,spring flowers & new born lambs in abundance, a stop at the 12th Century Castlemorton church, before moving on to the common - a wild oasis, an incident with a scurrilous farm dog caused the group to be separated, each half finding their own route across the common, ending up with a welcome cup of tea or ice cream at the Bakehouse in Welland village shop, 11 miles, fine weather, 12 riders.
The evening meal saw us gathered in the Wyche Inn, high on the Malvern hills, the panorama of the Vale of Evesham was highlighted for several minutes by a 'vertical' rainbow, good conversation was bolstered by the arrival of Sylvia & Eric to join the group for the remainder of the time in Malvern, where the weather looks set fair for the 3 next days of very interesting & well planned rides by Rodney & the two Chris's

On the second day our intrepid throng gathered together on the edge of Malvern Common on a fine and sunny morning. We travelled southwards with the Malvern Hills to our right basking in the sunshine, before heading eastwards through a rural setting towards Hanley Swan. Elevensies beckoned at The Swan where luxurious hot beverages were enjoyed by those who dared to indulge in the accompanied piece of fudge! We then travelled onwards towards Welland, scene of yesterday's excursion, and covered familiar lanes from Castlemorton Common towards Upton, with the vista of the Severn Valley ahead. Fortunately, the scurrilous dog was otherwise engaged today! A casual lunch was relished by all at the curiously named Drum & Monkey. Afterwards we ventured onto Upton upon Severn (sometimes it is Severn upon Upton), where an hour was spent exploring the environs. Our return journey took our merry band through quiet lanes to Hanley Swan, from where we retraced our way back to the starting point, up the only notable hill on our very enjoyable journey. A total of 20.8 miles were clocked up by 14 riders.
An evening meal for ten members of the party at the Bluebell Inn savoured good food and confabulation. Eric enhanced proceedings later with a brief but notable appearance.

Wednesday morning saw 15 intrepid riders ready to take the challenge of the Ledbury Loop. Setting off in bright sunshine through country lanes and some challenging undulations, the group came upon an intriguing modern house of a unique design which looked most impressive.
After some 7 miles a welcome coffee break at the Beaufort Arms was enjoyed by all. Meeting the local villagers who run the pub was most interesting hearing their tale of how they rescued the pub from the house developers and took over the day to day running of it. The ride to lunch was uneventful with only two dogs who decided to avoid being scurrilous as they had heard that their mates in the Malvern area had already fulfilled that duty.
Lunch at the Rose and Crown provided a break as the return journey would eventually take us back up to Ledbury.
On the way we encountered the dreaded ford which had proved very slippery in the past. Safely over the ford bridge we continued past Eastnor Castle towards Ledbury.
Once in the town we made our way along the old railway line but unfortunately the leader lost the last 1/2 mile of track but we all eventually made it to the car park safely.
All in all 22 miles, the weather held and is forecast to do so for Thursday's final ride of the week.

As EU elections got under way the group set off on a tour of the local polling stations. We parked at Leigh and made a short ride to the largest cruck tithe barn in England which we were suitably impressed by. Some felt we were still paying tithes to the EU ! After a group photo we set off for the next polling station and a welcome coffee at Alfrick community centre before cycling on to cross the River Teme where we tried (and mostly failed) to spot the eels. Then it was a slightly hairy ride on the A44 before lunch at the Royal Oak. Vast portions saw us amply refuelled for the next leg to Elgar’s Birthplace. Despite Road Closed warnings we made it through and enjoyed the display in his cottage. The ride back included an even more hairy stretch on the A4103 which fortunately all managed safely.
Sadly, Les felt unwell during the ride so Brian accompanied him back to his car and rejoined us later for lunch. We all met later in the evening for an enjoyable farewell meal.

2 November
Undaunted by the weather forecast 4 electrics and 3 unassisted pedallers enjoyed this hilly ride up to Shalden via the Avenue Garden Centre before a well earned lunch at The Royal Oak in Lasham.
Total mileage a tad under 17 miles.
For future reference, a long layby adjacent to the recreation ground provides good parking and on this occasion the village hall was open allowing access to the loos.

8 November
Woolmer Ride
11 of us set of on a grey but dry November morning from Sheet Green and rode the short distance, to Liss Triangle Centre for coffee. Fingers and toes were already getting rather chilled , so it was a welcome break. Two more joined us there for the next phase of the ride.
We progressed along the old railway line, a little muddy in places but mostly OK and then negotiated the mud at the gate to the Longmoor Enclosure. We continued on the gravel through this delightful unspoilt (except by the Army) area with colourful leaves on the trees.

It wasn’t long before there was what sounded like a big firework display and we realised it was a live firing day on the ranges where we were headed.
The straight track leads across a bridge over the A3 to the edge of the Woolmer Firing Ranges and it is there that the video Woolmer Ride was taken. Please take a look !

The track Circles the whole of the Range. Flat for the most part, but with one short sharp hill which took everyone by surprise. We then returned through the enclosure to the Temple Inn where another rider joined us for a very pleasant Bowl of Soup (or other) before the ride back home.

The ranges ride is a bit bumpy for road bikes but everyone managed about 19 miles so it was another good start to our cycling year.

16 Decenber – Christmas Lunch
14 Cyclists including 5 E bikes set off on a shortish ride from Sheet Green to The Jolly Drover in Liss where they met the other members who had arrived by car. So in total there were 32 members who sat down to our Christmas lunch and a great time was had by all. The food on offer was very varied and at a reasonable price and everyone thought that the lunch was good value for money.
Once the lunch was over the 14 cyclists made their way back to Petersfield along the old A3 and were home for 3 30pm.
We were very lucky with the weather with the rain holding off.

23 December – Pre-Christmas Ride
A dry if chilly day saw ten riders depart from Sheet Green and head North to Liss before making their way back through the lanes up Wheatham Hill and onto Ashford Chase. Here they encountered not only a sizable flood across the road but also a convoy of 4x4s all anxious to secure their turkey from Ashford Farm. However with hot soup and R’s mince pies to look forward they pressed on to enjoy a very pleasant and sociable lunch. The unanimous verdict was that it had been an excellent start to the Christmas festivities.

30 December - Hawkley
8 of us left the town for the Hawkley Inn. The pub was full for lunch later, but they accommodated us well & fed us. Tea & Christmas cake provided kindly by B & J at their home in Liss. Thanks for coming. Happy New Year to one and all

29 January – Oakhanger and Liphook
What felt like early springtime with the sun shining, seven of us set off from Liss Forest car park, first stop coffee at The Chocolate Frog, Oakhanger, suitably refreshed we proceeded through Kingsley, Lindford, Passfield & Liphook to the Deer’s Hut for lunch.
A brisk return ride alongside the A3 through Greatham to Liss Forest where we separated from the Petersfield riders who headed for Andlers Ash & home, 20 miles from & back to Liss Forest plus the Petersfield leg

14 Feb – Morning Ride to Buriton and West Harting
10 riders met at the lake car park for a 10 mile ramble around the lanes to Buriton and then on to West Harting. The countryside was wet and muddy but the birds were singing and we all enjoyed getting some fresh air and being out in fairly mild, calm weather aware of the very heavy rain the day before and storm Denis due to arrive the following day. We ended the ride at Sue’s for a bowl of soup, a cuppa, cake and a very social chat.

WANT TO KNOW MORE?
If you would like to try us give us a call. All you need is access to a bike and be willing to have a good time. The rides are all offered and run by established group members on various days of the week (not just weekends) All contact about rides etc. is by e-mail. There is no restriction on overall group numbers. If a large number book into a ride (not often a problem) we split into smaller groups on the road for safety and to minimise our impact on car drivers.

For further information please contact Malcolm Muggeridge, Group Co-ordinator via the "Click to send a Message!" facility (right hand side above) 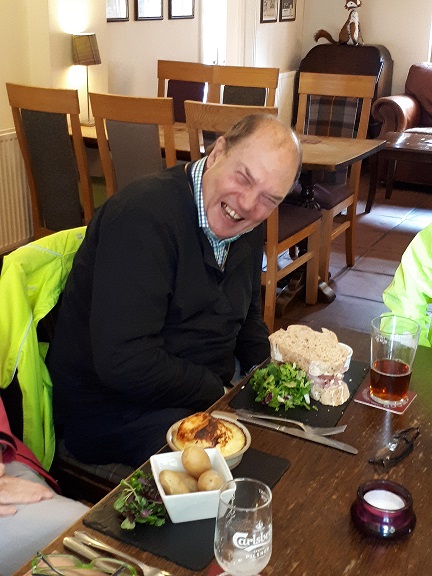