This group is suspended until further notice.

The Music Appreciation group meets on the 1st. Friday of the month in the lounge near the main entrance at the Forest Town Arena 2-4pm.

At our meetings we have a musical quiz, a raffle, one of our members gives a 'potted history' of their favourite artist or group and we have live music from our own "Now or Never" group.

Come and have an enjoyable afternoon, if you would like to compile a music quiz or give a short talk about your favourite artist or group, contact John.

27 members met at the Arena on Friday 6th April, a sad occasion as we remembered Keith and his dedication to the 60’s music group, we played one of his favourite Shadows tracks as we remembered his forming of the ‘Rave On’ Group with Chris and John and his work for charity with ‘Rave On'.

The way forward and future of the group was discussed, with various ideas coming from Chris and John.

Valerie Newborough gave us an intriguing and mind searching musical quiz about her favourite singer Engelbert Humperdinck and told us a few little known facts about the singer, which, I for one didn't know.

John Kirk gave us a potted history of one of his favourite groups, The Hollies, along with some of their hits and suggested that other members do a similar write up of their favourite group or artist for future meetings.

John Kirk has agreed to be the contact point for the group.

This U3A group goes from strength to strength and if it keeps expanding we will need the big hall.
We had another good attendance in September and welcomed several newcomers.
We altered the format slightly this month as all members received a free raffle ticket on entry with 6 prizes on offer i.e. 5 c.d's and a box of chocs .
Members were asked to bring a record or c.d. that meant a lot to them which was very well supported. They were handed a microphone and we had a mixture of sad and also happy tales.
This was followed by our 60's quiz with all the answers containing a boy's name and then the raffle draw.
Rave On welcomed back Tony on drums and played a short session in which we had quite a bit of audience participation joining in singing with us. This has given us the idea to do a session of sing-song numbers in the near future so the
'' 60's Choir '' can join in again. We all had a great afternoon and look forward to seeing you all again next time.
Chris is organising the October meeting as I am not available and the theme this month is '' The Mersey Sound ''. Please bring along your favourite tracks from this period. Chris is also going to perform some songs with his acoustic guitar and is hoping for help from '' The 60's Choir '' again.

Another good attendance for the August session who were entertained by your own ''Rave On'' .
This month's quiz was compiled by drummer John which had us all scratching our heads.
The answers were all sixties songs containing girl's names.
Bookings were also taken for two shows at the Palace Theatre.
For the September meeting would members please bring a record or c.d. with their favourite track and tell everyone why it is special to them. Keith has a special song which he is sure no-one will have heard before ( not even Chris! ).
In addition '' Rave On '' will have their original drummer Tony playing with them after his recent health problems.
Please come along and continue your support and let's get the Sherwood Room rocking again.

Quite a few new faces at the April meeting who enjoyed their afternoon out and all said they would be coming again.
We started by listening to a few records and c.d.'s whilst having a good chat.
This was followed by a quiz which set everyone's brains going into overdrive resulting in a high number of correct answers.
The live entertainment was provided by Keith alone as Tony and Chris were both unavailable on this occasion. 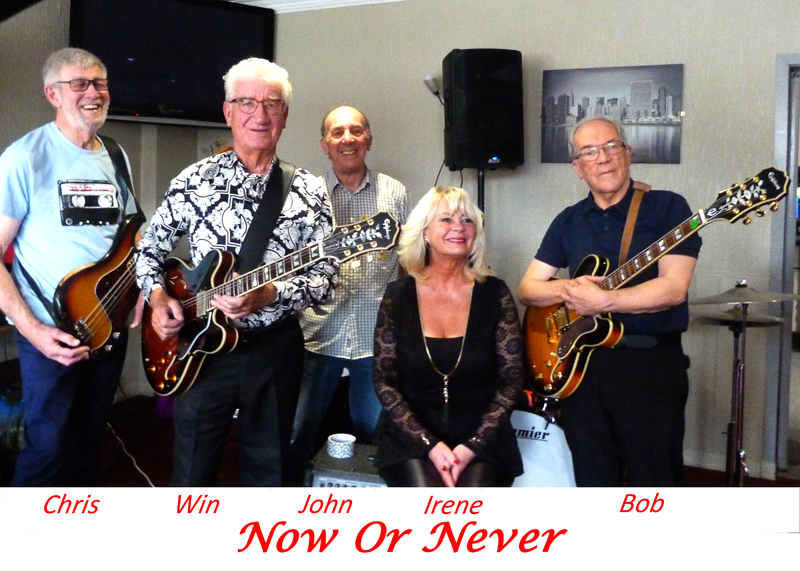