Saturday 2nd December 2017 The United Churches Together in Evesham held their annual Mince Pie Giveaway in Evesham High Street. For several years the churches in Evesham have celebrated Advent by handing out mince pies to shoppers and shopkeepers in Evesham town centre. As usual the event was warmly welcomed by all and over 1,000 mince pies were handed out.

As part of the event a team of musicians from Evesham Concert Band and singers from the various churches led carol singing much to the enjoyment of passers by. A spokesman for the event said: "We have been doing this for over five years now and it is amazing how many people and shopkeepers tell us what a nice idea it is and starts Christmas off with a good feeling." Text courtesy of Evesham Journal.

Later that afternoon, a small group of us played for the Teams4U Shoebox Send-Off Service.

Friday 24th November 2017 We were invited to play on the Green at Broadway to get the late night shoppers into a festive mood. It was a cold but dry evening and the Broadway Business Community had provided us with a tent and ample lighting, which was just as well as we play much better when we can see our music. We assembled at 6.00pm to start the first of two 45 minute sessions including a variety of Christmas songs and Carols.

Having noticed we had attracted a number of younger audience members Roger adjusted the order of play to entertain them and invited them to sing along to Rudolph the Red Nosed Reindeer and Jingle Bells.

About 20 minutes in we were approached by the leader of the local Churches Together Group who were due to hold a short carol service for the lighting of the Tree of Lights which was directly outside the tent. After a brief chat with Roger he discovered we were due to play the four carols that they were going to sing so we joined forces to accompany them.

We then took a 30 minute break and were treated to a much appreciated hot drink from Tisanes Tea Room while being entertained by music from Santa's Sleigh which was also parked on The Green and being looked after by the Round Table.

We completed our second session about 8pm with a rousing rendition of We Wish You a Merry Christmas and hoped that this was the message all the shoppers and band members took away with them.

We played again in Broadway on Friday 1st December 2017 inside the United Reform Church and have already been invited back for next year.

Saturday 30th September 2017 The Concert Band was asked to play at the inaugural Hampton (Evesham) Flower show, a family fun day that will hopefully make it's way on to social calendars for many years to come. The event took place on the new Hampton Village Green, just opposite the Hampton Farm Shop. The band provided background music while the green fingered exhibitors were being judged. We had a marquee to protect us from the elements but the rain held off until after our performance. And Yes, of course we played English Country Garden.

Friday 25th August 2017 The Court at Broadway is a development of retirement apartments with its own community centre and garden. A hot day in August made it the perfect venue for a cream tea event in the garden. The band provided the music, the residents provided the cream tea and a pleasant afternoon was had by all.

Sunday 16th July 2017 FRAME, the Festival of Rural Arts, Music and Entertainment is held annually in Church Lench specifically to showcase local talent and the Concert Band was invited to open the event this year. The open sided marquee gave us a wonderful view over to the Malvern Hills, that is until we played English Country Garden and the heavens opened. The rain soon passed as we completed our performance then stayed awhile to enjoy refreshments and listen to some of the follow on acts.

Wednesday 5th July 2017 The usual monthly U3A meeting was replaced this month by a concert at Evesham Methodist Church provided by the Choir, Concert Band and Play reading groups.

Saturday 24th June 2017 The Salford Priors Fête took place on a pleasantly hot summers day. There were plenty of stalls and attractions for all the family, enjoyed all the more for having the Concert Band playing a lively selection of popular music. At exactly 4.23pm there was an RAF Spitfire Flypast which was our cue to play ‘Those Magnificent Men in Their Flying Machines’ and ‘The Dambusters’. It raised a few smiles!

Saturday 17th June 2017 The Evesham Festival of Music is a week long event showcasing a diversity of musical talent, both professional and amateur, across several venues. The Concert Band performed at the Evesham Methodist Church and was one of a number of local music groups to take part. 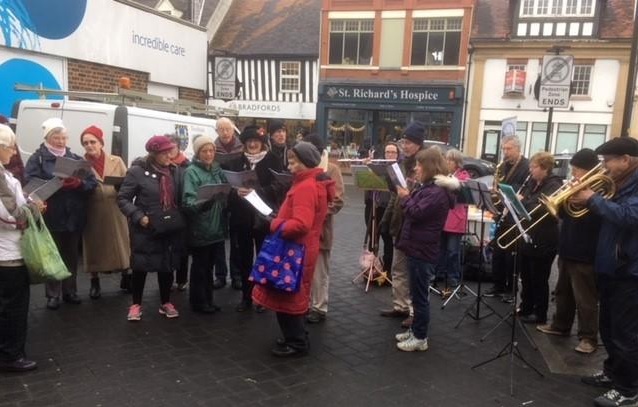