Saturday 14th December 2019 – Advent Celebration
It was an honour and a joy to play for the Evesham Churches Together Advent Celebration at All Saints Church. We enjoyed an afternoon of music, singing and prayer with instrumentals by the Evesham Concert Band and singing from the Baptist Church Engage Youth Group. We also accompanied the audience singing some of our favourite carols and a sing along of some Christmas songs. All proceeds from ticket sales and additional donations will go to Caring Hands in the Vale Lighthouse Project. £1,275 was raised in the afternoon.

Saturday 7th December 2019 – The Mince Pie Givaway
Thankfully it was dry and not too windy as we played on the High Street for the Mince Pie Givaway. This is organised by the Evesham Churches Together and a number of their members lead the carol singing while encourage the passing shoppers to sing with them, and of course eat mince pies. Over 600 mince pies where given away during the hour.

Friday 6th December 2019 - Broadway URC
The band played at the Broadway URC Church from 6:00 until 8:00 while the late night shoppers wandered in to see the Christmas Tree display. Some of the visitors decided to take the weight of their feet and stopped to listen to the music for a while. We even inspired one or two visitors to sing along to our popular selection of Christmas music. The warmth of the church was a welcome change to the cold of the previous week and we were treated to delicious mince pies and a hot drink during our half hour break.

Saturday 30th November 2019 – Teams4U Shoebox Send-Off
This short service is in recognition of the amazing work done by so many volunteers to make a difference to a child at Christmas. We always end this service with ‘You Shall Go Out With Joy’ which we play while those attending wave to one of the lorries as it leaves. This year it was too early for the lorry to leave but everyone waved anyway.

Friday 29th November 2019 – Broadway on The Green
We have become regulars on The Green for the Broadway late night shoppers. We played from 6.00 until 8.00 with a 30 min break for tea and coffee at Tisains. Our repertoire of Christmas songs and Carols was well received. We also accompanied the carol singers for the lighting of the Tree of Light. A little challenging this year as the old tree had been removed, the new Tree of Light was behind our tent but Rev Shellie carried on regardless and the tree looked beautiful .… in the distance.

The Concert Band stepped in on short notice to play in the first of our Festive Season performances. Accompanying the carol and remembrance service for the Tree of Light. This was in the Methodist Church this year because of the weather conditions.

What a lovely day! Playing for the third year we are pleased to have become a regular on the agenda for this event. We started playing at 12:00 to mark the opening of the show and continued playing until 1:30 with just a five minute pause to allow the official opening of the Flower Show Marquee. After a 30 minute break we played two more sessions one of 30 minutes and one of 40 minutes allowing a break for the dance troop and for us to finish at 3:30

This year we were situated next to the tea tent so I hope their customers enjoyed the entertainment. Although we did include a few old time waltzes and a tango we didn’t see anyone dancing. We were not so close to the dog show arena this year so our music and their PA system didn’t clash but we still managed to include ‘How Much is that Doggie in the Window’ and ‘Daddy wouldn’t Buy Me a Bow Wow’

Churches Together in Evesham organised a hymn service at St Peter’s Church Bengeworth following the Songs of Praise format. Each church had chosen a hymn for inclusion in the service giving the congregation the opportunity of singing some less familiar ones as well as some old favourites. The Concert Band started the service with an instrumental, ‘Praise Him on the Trumpet’ and accompanied all twelve hymns which had been arranged by Roger in the weeks preceding. Margaret sang the first verse of ‘Build Your Kingdom Here’ and led the rest as this was one of the less well known hymns. The Band also played a Selection from Joseph and the Technicolor Dreamcoat.

The Coughton Court Summer fete is held by the National Trust as a thank you to the local community. The Band was in a marquee on the back lawn amid a variety of stalls and traditional family games. The weather was warm and sunny and thankfully not too windy, a perfect day for playing. We played two 40 minute sets while an estimated 2000 visitors ambled by enjoying the entertainment. The National Trust provide tea and coffee during the break and we were also given vouchers to enter the house after our performance.
It’s the first time we have played for Coughton Court so we hope we made a good impression and get invited back again.

A small group of 8 musicians played on the corner of Library Arcade to help Subway celebrate 20 years of trade. While the band provided the entertainment Subway made a 17 foot long Sub which they were selling off in chunks - various fillings. They also raised £210 for the Tracy Sollis Leukaemia Trust.

On June 22nd the Concert Band were involved in the Evesham Festival of Music. We performed in an afternoon of free music along with two local choirs. The band played a selection of light classical pieces which had been selected at some time by a celebrity on Desert Island Discs, the Radio 4 programme running since 1941. Jill Moran of the Playreaders introduced the pieces with details of which celebrity chose them and their luxury item and book. We started as they do on the radio with the first few opening bars of ‘By the Sleepy Lagoon’ by Eric Coates but as this is a favourite of Roger Wyatt’s he couldn’t miss the opportunity of treating the audience to the whole piece at the end.

Following our successful charity concert last year for the Tracy Sollis Leukaemia Trust we decided to hold another one this year. The concert featured music from the second half of last century performed by the Concert Band led by Roger Wyatt and the visiting choir, Cleeve Harmony Ladies Chorus led by Donna Whitehouse. The music was researched and introduced by the Play Readers led by Jill Moran.

The Play Readers introduced the audience to 'The Birth of Rock and Roll' and the band opened with 'Hound Dog' when it came round to 'Rock Around The Clock' The choir couldn't resist invading the stage to join in singing with the band.

The Choir then introduced and sang a number of pieces a capella in four part harmony including ‘Under The Boardwalk’ (who would have thought it had been covered by Bruce Willis?) and ‘I Will Survive’ with some energetic choreography.

The band continued with a Beach Boys medley which represented the transition from Rock and Roll to Disco. The Play Readers reminded the audience that the Bee Gees song ‘Staying Alive’ was used to get the right rhythm for CPR which they demonstrated as the band played along. It was YMCA that got the choir motivated to do the actions.

The last section of the first half was dedicated to Freddie Mercury and Queen with the band playing ‘Don’t Stop Me Now’ and a medley including ‘We Are The Champions’ and ended with the choir singing ‘Bohemian Rhapsody’.

After a short break for tea and biscuits we left behind the dance music and focused on the shows, films and musicals such as South Pacific and The Sound Of Music. The choir included in their set ‘I’ll Be There For You’, the theme from the TV series Friends and the anthem from the musical ‘Chess’. The bands last medley from ‘Joseph and the Amazing Technicolor Dreamcoat’ had a fitting big band sound to it to end the evening on a high.

Sue Sollis gave a short speech of thanks to the performers helpers and audience for attending the concert and supporting the charity. Then the play readers introduced ‘Amarillo’ as a final song for the band and choir (and audience) to perform together. In Peter Kay style Roger and Donna marched the choir singing up and down the aisles.

Everyone agreed it was a great evening and looking forward to next year! 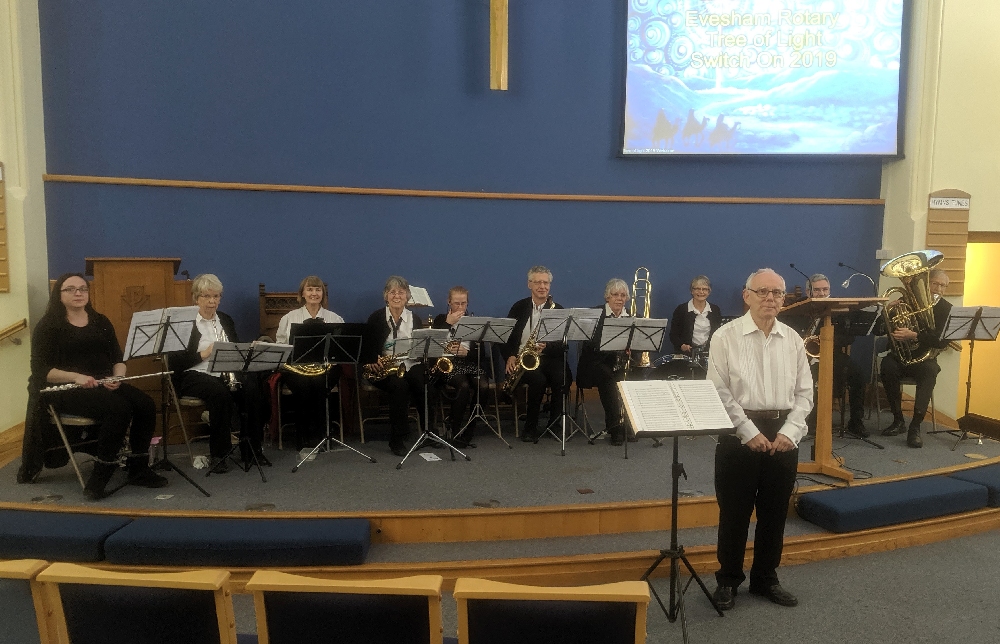 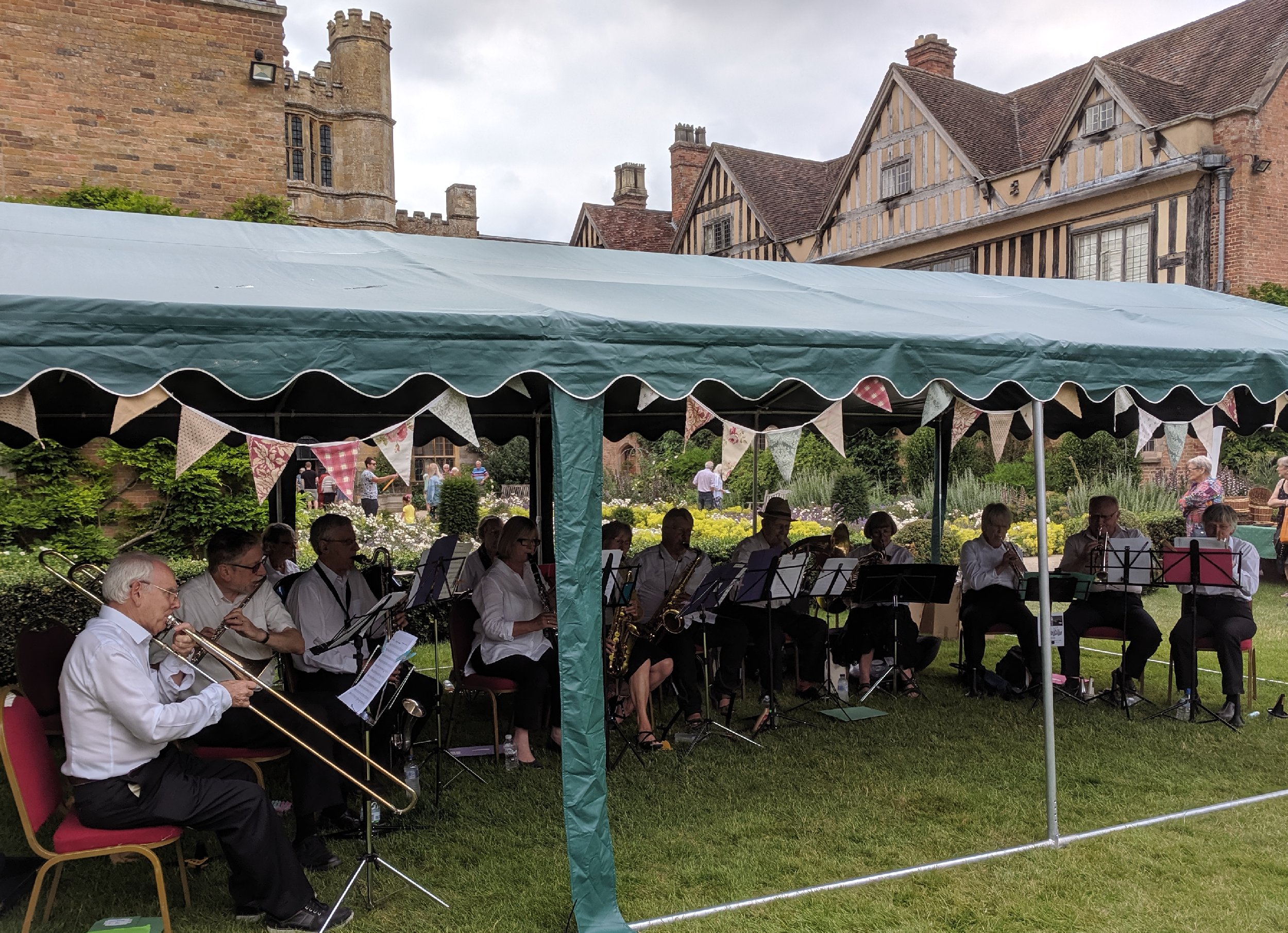 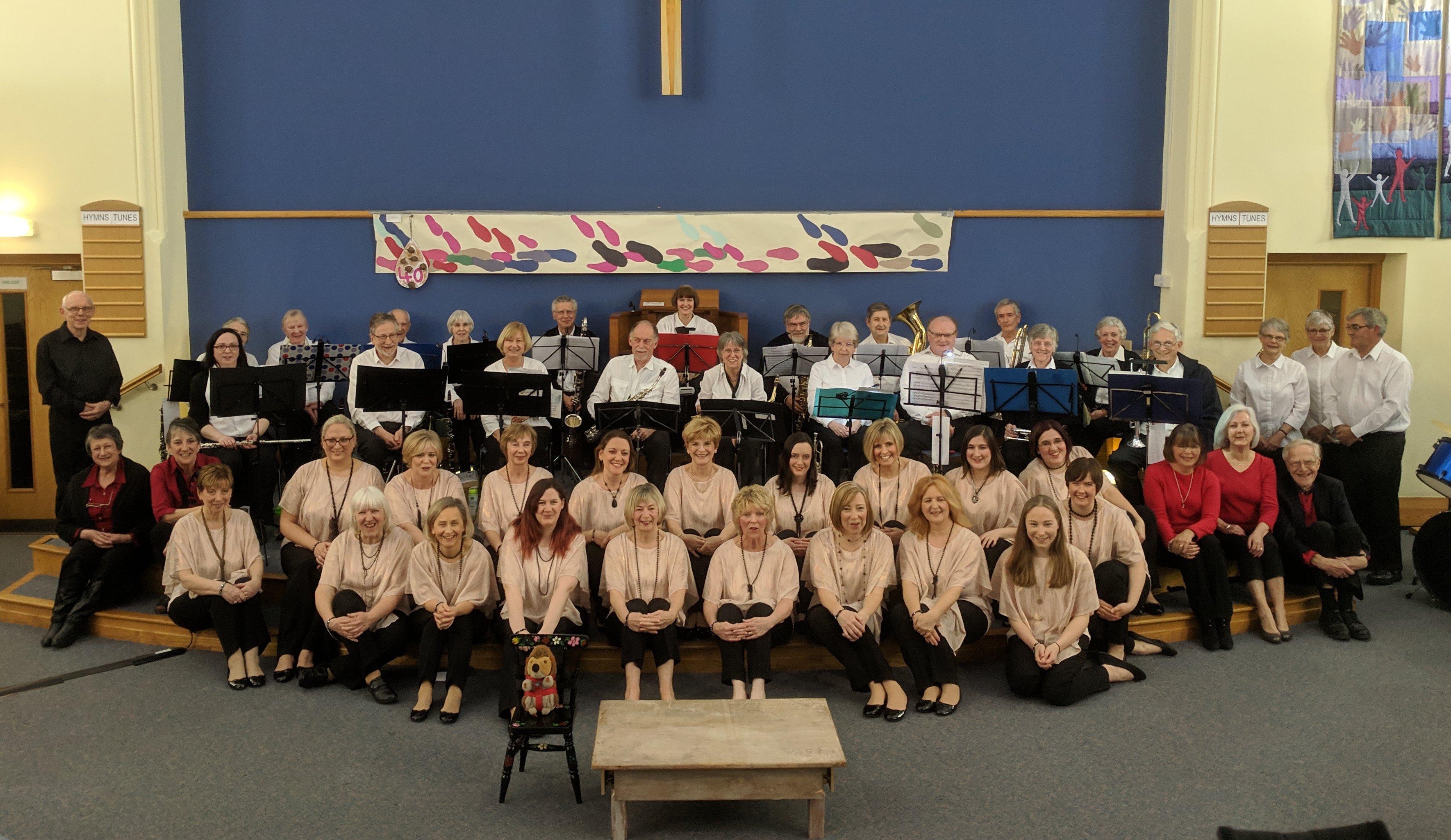 Rock Around the Musical