Information about all our coming speakers for 2021/22 are detailed below.

Our very own Roger and Carol Lewry gave a very professional presentation that included some extremely interesting colour slides and facts about Cleopatra’s Needle and how it was transported to the UK. What a journey! It turned out that engineers involved and were around at the time were related to Roger and Carol. Many years later Carol and Roger met and married. What a small World!

Next, we had the leader of our Family History group, Graham Irvine, talk to us about Ellis Island in New York. This island was the main dropping off point for immigrants entering America and in particular one of them was a distant relation to Graham. Graham then explained in detail just how difficult it was to actually gain entry, especially if you didn’t travel 1st or 2nd class. Millions of people who could only afford to travel ‘steerage’ were exposed to some gruelling interrogation upon arrival.
Again, a well-researched and interesting insight into ‘Family History’.

A huge ‘Thank You’ to Carol, Roger and Graham

October 2021 Speaker ....David Bell (The Plague Doctor)
Thank you to those members who turned up to our speakers meeting, and weren’t we treated to something quite special!
Our speaker, David Bell, enthralled us with the story of the Derbyshire village of Eyam and how the entire population were all but lost to The Plague. David also gave us some hilarious insight as to how certain ‘medical conditions’ were treated all those years ago. We were introduced to Samuel Pepys (or at least a life size dummy of him) along with the surgical instruments that would have been used on him to rid him of his ‘personal’ problems. David was a brilliant presenter and his anecdotes, including some from his own family life, were very amusing. Well done to our own John Moore for finding and booking this entertaining speaker.

September 2021 Speaker .... Ken Smith. - "Climbing Mount Kilimanjaro"
Following the AGM we were entertained by a fascinating talk from Ken Smith. As a dashing young man Ken travelled to Africa to become a teacher. His colourful slides gave us an insight into his early teaching career along with the great adventure he had when climbing Mount Kilimanjaro in Tanzania. Ken, a brilliant mathematician, went on to become a pioneer in the magical world of computing, a world we’d never heard about all those years ago.

October 2019 Speaker .... Andy Smith.
For those of you who came along, thank you all for your support, it really is very much appreciated. Just over 100 members enjoyed some wonderful anecdotes and songs from the brilliant and very talented Andy Smith. When Andy finished with us in Brackley he had to dash off to a theatre in Malvern to put the finishing touches to a show he had written and produced. I'm told that the show was to run for two days and was completely 'sold out'. He also works extremely hard for his chosen charities, a hospice in Rugby and 'Ovarian Cancer Research'. Andy's wife died just last month from this terrible disease and although he and his whole family were obviously devastated he contacted me and said that he would still very much like to come along to entertain us.

What a truly inspirational man.

The September 2019 'Speaker' meeting
A huge 'thank you' to those of you who came along to our September meeting to hear our speaker, Alan Tumber. Wasn't he good !
He could play the guitar, sing, tell some funny stories and recite some hilarious 'poems'. Alan's last song, 'Only Remembered', from the show War Horse was so moving he brought tears to our eyes. He had yours truly in floods ! According to many of you Alan is one of the very best entertainers we've featured in Brackley.

For those of you who could not make the June 2019 meeting
The presenter was Graham Short a 'micro engraver' and an absolute genius at his art. Graham, a colourful energetic speaker came all the way from the other side of Birmingham to see us. What a character he was, with his yellow/black shoes and white jacket emblazoned with colourful flowers! He shared some wonderful and very amusing anecdotes with us, including some lovely memories involving members of the Royal Family. Graham has his own studio in The Jewellery Quarter in Birmingham, but as he works mainly from midnight to sunrise you probably won't see him at his bench! Have a look online, you'll be amazed at what he does! 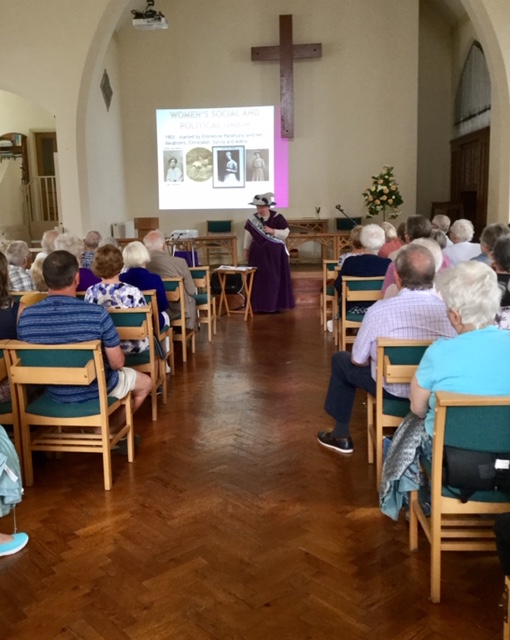 Suffragette at the Meeting on 18th July 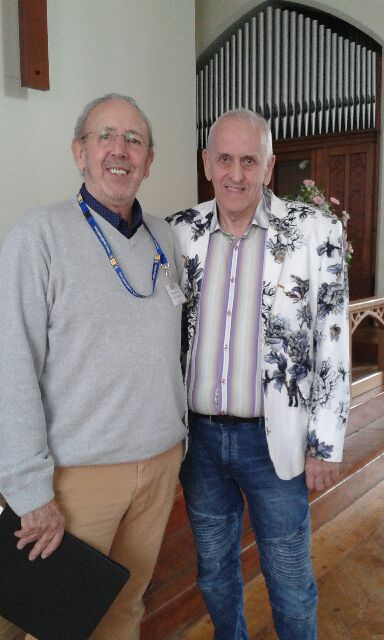 Ken hardly winced during this amputation